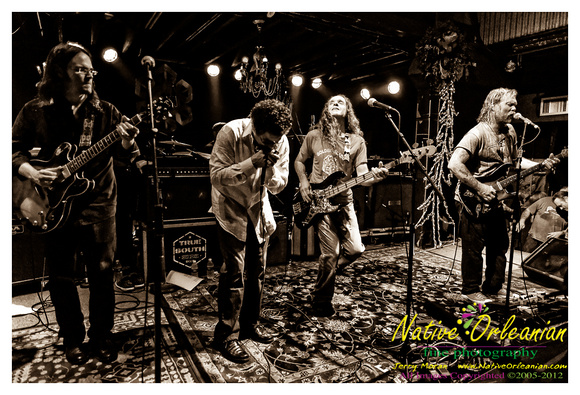 Night 2 of Anders Osborne's Christmas Spectacular Shows at Tipitinas was truly something special.... Three hours or so of hard drivingg raw performances literally from theget-gogo with a multitude of guests including Luther Dickenson, Lee Oskar, Papa Mali, Billy Iuso, Shannon McNally, Stanton Moore, and the Bonarama Horns Craig Kline, Mark Mullins and Greg Hicks, who stayed up on stage from maybe song three till the end playing the part of the all important roux in an amazing gumbo, these guys just play the part of a catalyst and add another dimension to Anders shows thats just sends it even farther over the top than Anders already pushes it ........ Both shows this weekend were sold out and the house was packed adding even more fuel to the fire, night 1 was fantastic, but the roof came off the joint sometime in the weee hrs Sunday morning......Congrats to my man Anders Osborne for pullin off the weekend sold out stand at Tipitinas, dat hasn't happened in a long long time......This is a taste of night 2 which I will add to mid week after I get a couple others jobs finished..... more pics can be seen at
http://www.nativeorleanian.org/anders_osborne_tipitinas_12_8_12
©2005-2012 Jerry Moran Native Orleanian LLC
©2005-2012 Jerry Moran Native Orleanian LLC
Powered by ZENFOLIO User Agreement
Cancel
Continue