Last week I passed by Audiophile Studios in the French Market, http://www.audiophilestudios.com/,
to pop of a few shots of Rejected Youth Nation in a recording session for their debut CD. The band is fronted by lead singer Omari Neville(son of Cyril Neville), along with drummer Tyler Clements, bassist Austin Clements, guitarist Gregg Malinario and MC Phil Burras. I caught these guys live earlier this year at the Musicians for Obama Benefit where they mesmerized the crowd with what was aptly described by Offbeat writer Brian Boyles, “What followed seemed detached from that theme and the rest of the evening’s more rootsy tone. The ensuing power chords drove half the audience to the bar and, man, did they miss out. Young Neville and his friends throttled through three afropunk/metal/funk cuts .......About 30 seconds in, the kids realized they were gonna kill it and never looked back, adding Dumpstaphunk’s Tony Hall on guitar to close things out.......”.......they certainly got my attention......we should be hearing a lot from these guys in the future......jerry ;-) 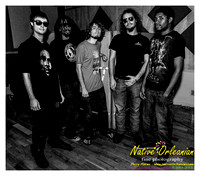