Over the past week there have been many second lines and events here and all over the world honoring Uncle Lionel Batiste and his legacy. Today was about the kids, teaching and passing on traditions, something Uncle Lionel tirelessly did on most Sunday's in the French Quarter. Yesterday the daily Second Lines continued, this one starting at the Candlelight Lounge in Treme. Without fail, James “12” Andrews has been a fixture leader and organizer of these events, when I heard a child's voice on WWOZ around noon yesterday announce, “James says all musicians meet at Tuba Fats Square at 5 o'clock”, I knew it was on....I talked to James for a bit about Unc and what will be goin on later this week, soon after which the band came into the Candlelight for final preparations. This day I did not take many images but just wanted to soak everything in, I immediately started to see James assuming the role (as he always has)of teacher and mentor, as I watched him throw his hands up in the air the first time the band tried to proceed out of the Candlelight, something wasn't right that time.....after a short talk, the band started up again with James lookin on, finally a look of approval and a point towards the door.....we hit the streets with a crowd including Uncle Norman, Unc's brother , some family and many others, first loopin behind Charbonnet to play for Unc....then to Kermit Ruffins Speakeasy and across N Claiborne into the 6th Ward. We made a few other stops along the way, the whole time with James orchestrating the band and keepin everything right. We got back to to the Candlelight where I hung around for a bit for a sausage po boy. I went to tell James goodbye asking,”You'll be here tomorrow huh?” to which he replied, “Jerry, I Told Unc we'd be doin these Second Lines till the cat's come home......” and I have no doubt he was serious as I left with a big smile as I am sure Uncle Lionel was smiling down on us also....... Enjoy the pics, more and a musical slideshow at http://www.nativeorleanian.org/july_16_second_line_uncle_lionel_batiste
Jerry ©2005-2012 Jerry Moran Native Orleanian LLC 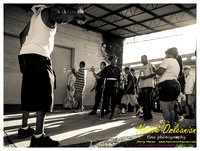