My St. Joseph's Night experience was a little bit different than usual this year. Normally I would just head over to Washington in LaSalle and take in everything in up-and-down Washington for a few hours and let everything come to me, and then hit Downtown on the way home.....not this year though. I knew something would be different when I was talking to Monk in Jamaica after we had just gone through a rainy Mardi Gras Day. Monk normally doesn't suit up for St. Joseph's Night, at least since Katrina.........So when I asked him if he'd be suiting up this year, and his answer was an immediate “yes indeed”......I didn't ask why, I just smiled knowing this year would be different. With no idea how it would go, I was just along for the ride.....camera in tow of course. We left Monks house at the darker side of dusk......just as he'd described to me earlier. See'n the Big Chief along with the entire gang of Golden Eagle Mardi Gras Indians, Second Chief Joseph, Big Queen Wynoka, Spy Boy Jwan and the rest of the Golden Eagles, lined up in front of Monks with that dusk driven light was just something to behold, some PRETTY PRETTY sights as we met up outside Monks house with the Wild Tchoupitoulas Mardi Gras Indians.........Led by Spy Boy Jwan we took off on foot and headed towards Washington and LaSalle, the same route we take to Second and Dryades on Mardi Gras Day. I'd have to say that once we arrived there, at least from this new perspective I was takin in, my first thought was that I had never seen St. Josephs Night with so many people......over the last few years there has definitely been larger crowds......not like this though.......and being inside all that with the Golden Eagle Mardi Gras Indians(and it being the first time I had ever seen Monk suited up at night) movin through the people, the streets, see'n all the gangs AT NIGHT , indians everywhere, hearin all the beats and chants at once with brass bands off in the distance.......that's the best words can do for me.......Once we hit Washington and Lasalle, besides runnin into Big Chief Spoon et al(WOW!!) it's a blur all the way to Second and Dryades.........perhaps these pics from that night will assist.......Enjoy the pics and see ya at SUPER SUNDAY!!!! Jerry ;-) Jerry ;-) A musical slideshow and more pics can be seen at http://www.nativeorleanian.org/st_josephs_night_2014_big_chief_monk_boudreaux
©2005-2013 Jerry Moran Native Orleanian LLC 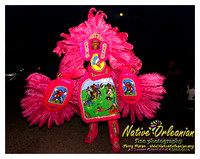 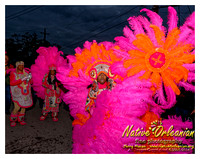