Last Friday I had the pleasure of once again shooting Paul Sanchez and Coleman DeKay's “Nine Lives, A Musical Witness of New Orleans”. This night was the 9 Year Anniversary of “K” and the last of 3 sold out performances held at Le Petit Theatre, all receiving rave reviews.......I have shot the play several times, one would think it would get old but my eyes still well up during certain parts of the performance......The play never gets old as it continually evolves with the time gone by as does our culture..... I can't say enough about the cast, new and old, and of course the band......More stills from the performance can be seen along with a musical slideshow to music of “Nine Lives ” soundtrack can be seen at http://www.nativeorleanian.org/nine_lives_le_petit_theatre_8_29_14
All Rights Reserved ©2005-2014 Jerry Moran Native Orleanian LLC 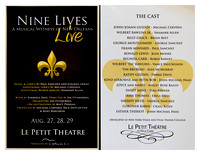